Are you Organized or Messy in the Kitchen? 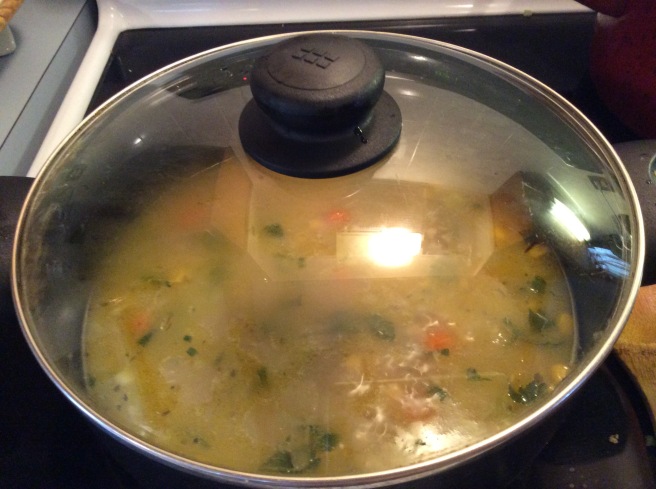 Just a week and a half ago,  when my sister in law and I were prepping for the Thanksgiving dinner, my thoughts were how organized we were while we cooked. Because I have a good sized kitchen and workspace now, we each had ample counter room to gather our ingredients and get to work. Not only that, but we washed dishes after each task and dried them shortly after.

Now I have a question for you and you just think about it and be honest with yourself, are you organized or messy? When you cook or bake, do you clean as you go or create a magnificent mess and deal with it later? Maybe it doesn’t matter to you, as long as it gets cleaned up eventually. Perhaps you are already organized and neat as a pin in the kitchen, so then just be content that you’ve created great kitchen work habits.

Honestly most of the time, I make a bit of mess, a disarray of ingredients on the counter amid bowls and cups and measuring spoons, while cooking or baking. I’ve always been that way, organized setting up the ingredients but messy with the rest.

Now that I’ve faced this problem, I feel like I should work on it to become a bit more organized. First it’s necessary to fill the kitchen sink with soapy hot water and as I use the cups, teaspoons and bowls I can plop them in. Washing dishes as you go prevents a big mess and saves time in the end. Next I plan to wash the counter as I spill flour, sugar or whatever. Lastly it’s helpful to put each ingredient away as you use it. I do this sometimes but it’s truly not a habit yet.

Other tips to stay organized:

*Plan your oven times. This was a challenge at Thanksgiving because we used the oven for several things, many with different baking temperatures. Decide which dishes go in first and set the timer. Write a list or keep a mental list of the pies, cakes or dishes, their temperature and baking time. It helped us that we did some dishes the day before.

*Write down any ingredients that you use up for a future shopping list. It’s important to pen this, because you may forget you used it up until you need it for baking again.

*If you must share your space, do it in fun. Fun chatter and a magical music playlist will lighten the mood. Designate which counter top or space you and your friend will have. Give that person the bowls, cups and measuring spoons she needs.

Staying organized and clean in the kitchen will alleviate any chaos or mess. You’ll be happier that you did this and probably will save yourself some clean up time.

In Dedication to Grammy Doyle, my Dad’s Mother

Every family has a staunch recipe that stands the test of time. It’s the go-to dish that always results in success. It’s passed down with pride and the unspoken agreement that future generations will do the same. My family has this recipe… it was my Grammy Doyle’s dessert recipe and you always could count on her making it at gatherings, whether it was my dad’s birthday or Christmas.

The word was that it was a secret, though I’m not sure of the origin. I’ll never know where my Grammy got it or if it was handed down to her. All I know is that it’s one of the few constants when going to her house and I will never stop associating Grammy with her Mystery Mocha dessert. Now that she is gone, this recipe means even more…a little reminder of what was.

When arriving in the small hamlet of West Fairlee, Vermont, one corner market stood. A traveler would see quaint simple houses. Next to the fire station stood my grandparent’s house on a little hill and when you rolled up the sloped gravel driveway, you spied a screened in porch. Amid dusty chairs sat an old forlorn piano, forgotten and well out of tune. All the grandchildren probably tinkered with the keys at one time or another.

This many years later I can still hear the rickety screen door, as if it  was on the set of the television show, The Walton’s. Inside the house you entered in the dining room, where was a huge wooden table that had fed six children at one time and all the visiting relatives through the years. Another prized piano stood beyond, where my Grammy played church hymns on it. This treasure was played often and every once in awhile she played for us.

The living room had wooden exposed beams, a rustic living space with a few windows to let light in. A long old fashioned radio stood on one wall, which belted out many Red Sox games. My Grammy and Grampa would sit and listen to the radio and play by play well into the seventies. Then years later a television stood there as well, but I think it was never the same to them as the play by play. As kids, we would creep over to Gramps, who would be relaxing on the couch and he would grab us and tickle us. Wth a silly grin and rolled up tongue, he was the tickle master. There were squeals of delight because he was fun and loving.

Mystery Mocha cake was often baked for my dad, since it was his favorite. He was her first born, David, and was and still is a chocolate fan. (I think this is where I got my chocolate addiction!) When my parents were married, my mom made it and I’m sure my stepmom makes it as well. Now my sister and I make it from time to time. My sons aren’t used to the rich chocolate taste and since it has coffee in it, they don’t care for it, but my husband likes it well enough and I do too.

It’s as if Grammy’s kitchen comes to life when I make Mystery Mocha, for it’s a family recipe and a reminder of her and our visits to the Doyle house. It does taste the very same, with rich, dark chocolate with a complement of mocha flavor from the double strength coffee. I think it’s more than a recipe but a bit of Grammy’s legacy in every bite!

Mix dry ingredients. Melt the unsweetened chocolate with the butter. Add the milk and vanilla. Put mixture into greased cake pan and top with the following: brown sugar, granulated sugar, and cocoa. Pour cold coffee over the top. Bake at 375 F for 45 minutes. Serve with vanilla ice cream or whipped cream.
Serve for family or company. I recommend serving this rich dessert with a scoop of ice cream or a dollop of whipped cream!

Mary Blowey, owner of Heartandsoul974@wordpress.com . Unauthorized use or duplication of this material without express or written permission from the owner of this site is strictly prohibited.

After The Rain
Don't Make It Weird

You can sit with me. I used to be With It...But, then they changed what "It" was

A Petite Slice of Life

Musings from a teacher, runner, knitter, baker and reader

Be inspired. Be you.

Put on Your Cake Pants

Cooking with a Wallflower
When Timber Makes One Still

"Everyone needs beauty as well as bread, places to play in and pray in, where nature may heal and give strength to the soul" -John Muir

How to Create an Organic Permaculture Suburban Homestead

This Much I Know

exploring life now that our small people have all grown up

Giving my best as a wife, mother and follower of Christ. Perfection not found here.

Finding Jesus in the Midst of Everything

Gardening To Fill The Pantry!

Tales from the Cabbage Patch

Because everyone wonders where they came from

The Diary of a Happy Mom: 40 and Beyond

The trials and tribulations of an adventurous modern mom

Let your mind out of its cage.

Discovering the joy of art

...where books and art feel at home

I have people to kill, lives to ruin, plagues to bring, and worlds to destroy. I am not the Angel of Death. I'm a fiction writer.

There is Never Nothing going on...

The View from the Porch

Observations on the simple life.

"All is grist for the mill." - A Proverb

Sharing the beauty of the world.

an ongoing experiment in the dirt, 35 plus years

Beat About The Book

Greetings! I’m passionate about the natural world we inhabit; the written word; and photography. Oh, and I should mention – I’m an eternal optimist. My cup is always half full.

Safari of the Mind

A foray into food, flowers and travel